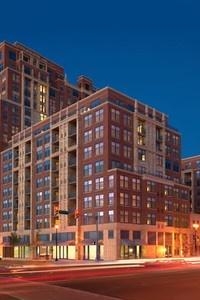 The Gramercy At Metropolitan Park 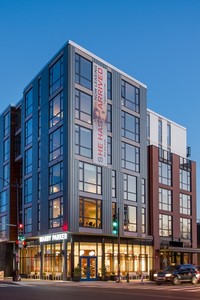 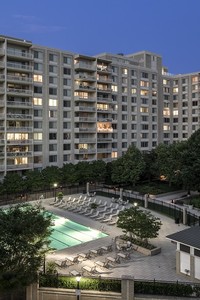 Gorgeous and spacious apartment with huge windows and great light. Walking distance to Whole Foods and everything else in Crystal City and Pentagon City, plus two Metro stops. Major cons are the expensive prices and the noisy Amazon construction directly across the street, which is quite loud and constant. Also, the pool was not open for the entire Summer 2020 season "due to Covid" but hopefully it re-opens this spring and summer.

I've been living in this apartment complex since 2016 and it was a great find. The staff is really personable and quick to help with any request you may have. The building is well kept and they are offering 1 month rent free currently with a waived amenity fee. I recently upgraded to a 1 BR (1000 sqft) and there are many units ranging from studios to 3 BRs to fit all needs.

The summer is great here since they have an awesome pool. Overall the amenities are what you'd expect from any building of this size. The location is decent, but there aren't many "Happy Hour" spots near by or places to go out at night. There are some good family owned restaurants nearby that are walkable, and there is a strip on Crystal Drive that has parks, and plenty of green space to enjoy. It's the perfect location if you value accessibility to places you want to go, but want to save on rent. I find myself ubering back from Georgetown after evening classes instead of using public transportation which will run about $10-$15 but it's an 8 minute drive.

In terms of getting into downtown DC, and other areas, here are some reference points.

COVID has caused all the amenities to close (i.e. gym, sitting areas, and outdoor patios). Sometimes getting mail also takes a while, and there have been complications with accidental pickups for other apartment's mail as a result of COVID no-contact mail collection. But overall the apartment complex has been very good about social distancing and protecting the inhabitants of the complex.

Love the building, but the property management company has communication problems and tried to increase our rent before listing our unit at a price less than what we pay once we gave notice. Its a big company and they don't care about individual residents, but the property itself is nice.

Paying for convenience and location

The units are bright and some have amazing views of the city and Washington monument. All units have in-unit washer and dryer, which was a huge perk for me.

The downsides of the Shay are the cost & the proximity to U street, which can get loud on weekends and on nights when people are out. The gym is also rather small, and the community shared space doesn’t have a lot of outlets.

I love where I live!

Great place to live in. I am 6 minutes from the metro station by foot and a 20 minute driver to George Washington University, 30 minutes to the VA hospital. The area is very nice and safe to live in. The building I live in has 2 neighboring building for more rent and bedroom availability options. Definitely recommend it.

Very close to the metro and great, responsive management

8 management rating Reviewed by Howard Graduate Student on May 7, 2019

Love everything except parking. We share one spot and it can be hard to find the other spot.

Apartment is about a 10 minute walk from both Rosslyn and Courthouse metro stops. The apartment and appliances are nice and in very good shape. Elevator is a little slow and not very big, so if you need to move a large piece of furniture up a few flight of stairs you might have some difficulties. Walking distance to safeway and target for groceries. It's also walking distance to quite a few places to eat. The gym in the building is a little small, but management also owns the apartment(Rosslyn Heights) across the street and you are able to use their gym and pool.

My biggest issue is the commute. In the morning it is fine- it usually take 15-20 minutes to get to capital one's HQ building. In the evening, from around 4:45 - 6, it takes about 30 minutes or even longer due to traffic. I think this is pretty common if you live anywhere far from the office - it is just an annoying aspect of living here. It is about a 10 minute walk from the orange line, but that does not go directly to Capital One - you would have to transfer in East Falls Church.

The people in this community are fantastic, and there are not too many issues with noise as the walls are concrete. This is near many storage facilities, so sometimes I will hear noise from those facilities once or twice at night (usually, this is not an issue). I also have occasionally heard some noise from my neighbor (again, this is usually not an issue).

They have a lot of fun events, and the property management is very responsive. Maintenance is very quick, and an emergency maintenance technician lives on site and is very responsive. Property management has had issues with charging me for parking incorrectly, and with changing my parking spots due to their parking spot system. It's near the mosaic district as well, which is a nice area.

Convenient and Comfy in VA

The metro is across the street through the Gateway Marriott. Getting to law school takes about 30 minutes on the blue line, including walking. Only issue is it's hard to go between school and home, so, if you need a suit, I just wear mine to school for the day.

Costco is around the corner, which is good for things you need in bulk, and Pentagon City is a ten minute walk. Harris Teeter is just beyond the main mall at Pentagon City, also an easy walk. Lastly, there's also a Rite Aid in the Crystal City Shops area. And there's a row of restaurants down the street.

There's a library down the street as well.

Best part of the apartment itself is it's larger than in the city, quiet, and comfortable. It used to be a hotel, and now it's mostly residential. Staff are friendly.

For comparison, places in Courthouse along the orange/silver line might have similar prices, be a similar distance from school, and have good amenities, too.

Only complaint is that studios don't have their own washing/drying machine, and utilities, i.e. gas, water, electricity, are based on square footage, not use (about $90/mth for my studio), and wifi here is another $100. Not sure what the prices are like in other parts of VA, but I've heard DC wifi is at least cheaper.

For a general sense of this area, it's very safe. Feels a bit like a retirement community, even though most of my neighbors are students and families.

Also, it can access the yellow line, which is convenient if you need to go to the center of the city for anything.

Best Bang for your Buck in Arlington

I have been at this apartment complex for over a year and plan to stay for another two. It's the best bargain in South Arlington but you certainly have to own a car to be in the area. Commuting is easy, as they run a shuttle bus M-F from the apartment complex straight to Pentagon City Metro. The walls are paper thin though, so we are very used to knowing our neighbors well!